Reducing VAWG around water and sanitation

Creating safe and inclusive urban environments is a top priority for UK government, who have signed up to several international commitments in this area, including Sustainable Development Goal 11 to ‘make cities and human settlements inclusive, safe, resilient and sustainable’, with a target that directly contributes to addressing women and girls’ safety in public spaces. 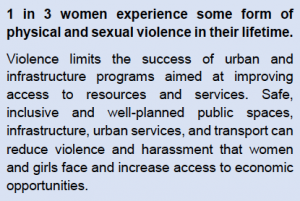 Violence and the threat of violence holds back economic growth in urban areas, limiting women’s mobility, access to economic opportunities, and the ability to move into higher paid or more secure jobs. The cost of violence against women ranges from 1.4% to 3.7% of Gross Domestic Product (GDP), according to recent costing studies within developing country contexts.

Risks of violence against women and girls around water and sanitation

While using and travelling to/from water and sanitary facilities, as well as when defecating in the open, particularly at night. For example, DFID-funded research in urban slums in Kampala, Uganda found that women were afraid of using toilets after nightfall due to what they perceived to be a high probability of attack and rape. The women reported that it was not uncommon for potential assailants to hide inside the latrines, particularly after dark. [1] Similarly, 77% of women reported feeling unsafe using public toilets in urban slums in and around Lagos, Nigeria. [2]

Verbal and physical violence when women and children have to queue for extended time periods to use water or sanitation facilities, either in fights with other service users, or facing punishment for their late return home. [3]

Children can be vulnerable to violence when they are left at home or with relatives/ neighbours while the mother leaves to collect water or undertake other tasks. [4]

Women working in the WASH sector may also be vulnerable to harassment, bullying and sexual exploitation during training and employment, in both the formal and informal economy. In Liberia, for example, girls who sell water from household-to-household are vulnerable to violence and there have been cases of girl water vendors being raped by householders. [5]

How to build gender-transformative WASH programmes?

DFID [6] has produced a Practitioners Toolkit on Violence, Gender and WASH with  ten principles which should be considered in WASH institutions and programmes. The principles vary by context and it is not expected that all actions will be undertaken in every WASH programme.

What are the key opportunities and promising practice?

Involving vulnerable women in decision-making on the siting, design and management of facilities: Location of public latrines can put women at risk of violence when travelling to the site. [7] For instance, a study in Delhi found that women were afraid of attack or rape whilst travelling to, often distant WASH facilities after nightfall – a situation made worse by interruptions to electricity, both inside the communal facilities, and when travelling to them. [8] Poor design of facilities can also exacerbate harassment or violence, such as a lack of roof on the toilet block, allowing boys and men to look inside when it is in use. To tackle this, small measures such as ensuring women and adolescent girls are involved in the decision process surrounding the design and siting of facilities is important. In some urban slum initiatives, water and sanitation facilities have been handed over to women to govern, manage, monitor and evaluate.[9] In an alternative approach, NGO Force has been working with communities in Delhi to monitor and evaluate local toilets that were being poorly managed by subcontracted private firms, and women have been recording the maintenance and safety of toilets. [10]

Female attendants for female-only latrines is a quick win for ensuring water and hygiene provision is designed and implemented in a gender-sensitive way. Gender-segregated toilets and washing facilities, with female attendants for female-only latrines and doors that lock from the inside, offers privacy and can help reduce the risk of violence for women and girls. [11]

Work with communities –  men and women – to prevent and respond to VAWG in WASH provision at five key stages: (1) involve community in project initiation (e.g. assessment, analysis and design), particularly vulnerable groups of women and adolescent girls; (2) when carrying out training for WASH communities and/or small-scale service providers; (3) when carrying out monitoring and feedback at community level; (4) during group sessions, e.g. on menstrual hygiene management, HIV or gender; and (5) as stand-alone sessions as the need arises. [12] It is also important to identify how the  complex links between VAWG, water and sanitation relate to social and gender norms. For example, taboos around defecation and menstruation mean women and girls may prefer to use toilets/bathing units in the dark. Similarly, norms around masculinity may prevent boys and men who experience violence while accessing water and sanitation from reporting it. [13]

Advocacy and communications are required to raise awareness around the connections between vulnerability to violence and WASH, and to tackle social taboos surrounding the issue. DFID’s Practitioners’ Toolkit urges targeted advocacy, directing particular messages to certain groups. [14] A wide range of advocacy  and communication methods have been used at the community level, including posters (see right), postcards, billboards. [15]  Other key target groups for advocacy include: WASH sector professionals, to increase understanding of the connection to violence and their professional responsibility in this regard; specialists working on protection, gender, GBV, health and other areas, to encourage new ideas to promote action and support cross-sectoral collaboration and learning; and governments and donors to promote prioritisation of water and sanitation in development plans and increase the availability of funds required to support training and additional resourcing.

Training and building the capacity of programme staff: DFID’s Practitioners’ Toolkit identifies a key responsibility for organisations working in the sector to be developing staff and partner capacity to understand issues related to WASH and violence and where their professional responsibilities lie. [16] For instance, the Inter-Agency Standing Committee, which aims to improve coordination in humanitarian assistance, has included gender, VAWG and WASH recommendations into a number of its key documents, including guidelines for gender-based violence in humanitarian settings, a gender handbook (incorporating standalone gender and WASH sheet) and associated gender training materials. [17] In addition, training or orientation should be provided to staff to cover context-specific vulnerabilities to violence, cultural norms, attitudes to topics such as menstruation, and behaviours which might result in violence.

Women’s WASH groups to discuss and propose strategies to reduce violence. For example, Oxfam introduced women’s WASH platforms in Bangladesh. Prior to the project, married women complained that in the dry season they could not bathe and so regularly felt unclean and shy to sleep with their husbands, which in turn led to physical/mental abuse by husbands. The WASH platforms provided a safe space to discuss these issues, raise them with their husbands and community leaders, and resist violence when it occurs. Women also helped improve the design of WASH facilities to make them safer to use. [18]

Policies, strategies and codes of conduct that ensure prevention of VAWG is incorporated into WASH provision, including enforcement mechanisms to avoid the sexual abuse and exploitation of beneficiaries. As an example of good policy practice, a draft strategic framework was developed in collaboration between a local authority, local NGO and international NGO to improve women’s safety in public spaces in Delhi. [20] The framework includes WASH specific strategies, in addition to protection and legal aspects, and education and advocacy elements. Feeding into this, action research was undertaken by Jagori along with Women in Cities International in two sites in Delhi, aiming to address the ‘gender services gap’ and test out the Women’s Safety Audit Methodology, identifying issues and then developing a model for engaging women with their local government agencies and other providers. [21] As a result, a new relationship formed between women, communities and sanitation workers, levels of harassment went down, and women designed a new community toilet complex addressing a number of key concerns.

[14] For instance, one key target group for advocacy are those within the local community – community leaders, school teachers, health professionals, religious leaders, and community groups, amongst others.

[15] Developed in response to a research exercise on WASH gender relations in Fiji and Vanuatu. (SHARE Toolkit, 2014).