Construction Sector Employment in Low-Income Countries: Size of the Sector

Drivers of growth in the construction sector

Three of the principal driving forces of growth in construction markets are:

The construction, renovation, maintenance and demolition of buildings and civil engineering projects together accounted for more than 273 million (part-time and full time) jobs worldwide in 2014, constituting an estimated 8.6% of the total global employment.[8] Around 70 million people work in construction in DFID countries of focus, corresponding to an average of 7.6% of the total workforce in these countries. Female employment constitutes a small but growing share of employment in these countries: 11.2% on average in 2014, above the world average of 9.5%.[9] Figure 1 shows the share of the workforce employed in the construction industry in DFID focus countries, current and expected in 2019; most have smaller than global average construction sector employment, but are growing at a faster than average rate.

Figure 1: Proportion of the workforce employed in the construction industry (2014) and expected change 2014-2019 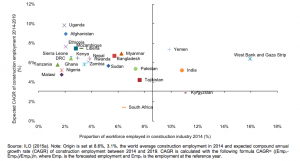 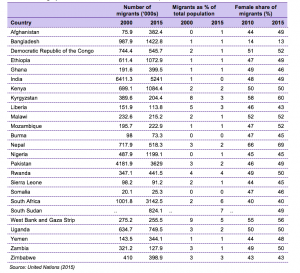 Migrants have long been a structural component of the construction workforce in many countries. Table 1, on the previous page, shows that migrants as a percentage of the total population in DFID focus countries ranged from 0 to 7% in 2015. The International Migration Report (2015) compiles estimates of migrants living for one year or longer in a country other than the one in which he or she was born.[10][11]Data includes both labour migrants as well as accompanying family and students. Information should therefore be understood as a proxy of labour migration.

The incidence of migrant workers in the construction sector is generally higher than in other sectors due to the seasonal and project-based nature of employment. Construction is often considered an ‘easy entry’ sector because it needs a considerable amount of non-skilled and semi-skilled workers. This, together with the fact that the sector is often not heavily regulated in DFID focus countries makes it an easier sector to enter for non-regulated migrants. In some cases, this leads to the participation of large amounts of foreign labour,[12] e.g. in Kyrgyzstan, a 2015 household income/expenditure survey showed migrants constitute around 29% of total workers in the sector.

The presence of Chinese contractors together with large numbers of migrant workers in the construction sector across Africa is being increasingly scrutinised. It has been argued that such foreign contractors do not employ the local workforce on their projects. Recent data however reveals that up to 85% of employees of Chinese contractors in Africa are locals.

Figure 2: Share of women workers out of all workers in the construction industry in 2014, and expected change by 2019

The construction sector is underpinned by an extensive supply chain, both in terms of service delivery and the underlying materials and inputs. This can include companies and workers engaged in upstream industries such as mining and forestry, as well as intermediaries (e.g. processing, manufacturing, transportation). There is also a large downstream industry related to real estate and commercial property management, and other infrastructure services. Figure 3 illustrates the different elements of the construction value chain, mapping the large number of potential stakeholders involved. 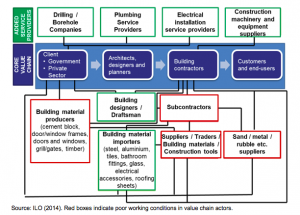 The size of the construction supply chain and related industries (both backward and forward) is important because it demonstrates the broad sectoral scope to improve employment practices and maximise economic growth opportunities. Most of the labour opportunities associated with construction are indirect and happen through the manufacture of goods or the supply of ancillary services. These sectors become even more important as construction methods shift towards pre-fabrication and supply chains become more integrated. Supply chain interventions are therefore likely to be more effective than direct construction interventions in improving the quantity and quality of employment in a sustainable manner.

[4] The correlation coefficient is 0.19. It is obtained with the employment share of the construction sector for the year 2014 (ILOSTAT) and development is defined as GDP per capita, PPP (current international $) 2014.

[10] Estimates of the number of migrants in the construction industry are only available for Kyrgyzstan and Yemen. Source: ILOSTAT.

[11] This means that many foreign workers and international students are counted as migrants. Additionally, the UN considers refugees and, in some cases, their descendants (such as Palestinians born in refugee camps outside of the Palestinian territories) to be international migrants. Estimates of the number of unauthorised immigrants are included in these reported figures. Tourists, foreign-aid workers, temporary workers employed abroad for less than a year, and overseas military personnel are not counted as migrants.